Known locally as the “Willy Wonka of Sausages”, Barry John Crowe is a 2nd generation artisan butcher that has been creating quality sausages in Cavan since the age of 13. With over 21 flavours to choose from, these sausages will be a hit on the breakfast, lunch or dinner table in your house.

The beginning of a great tradition… 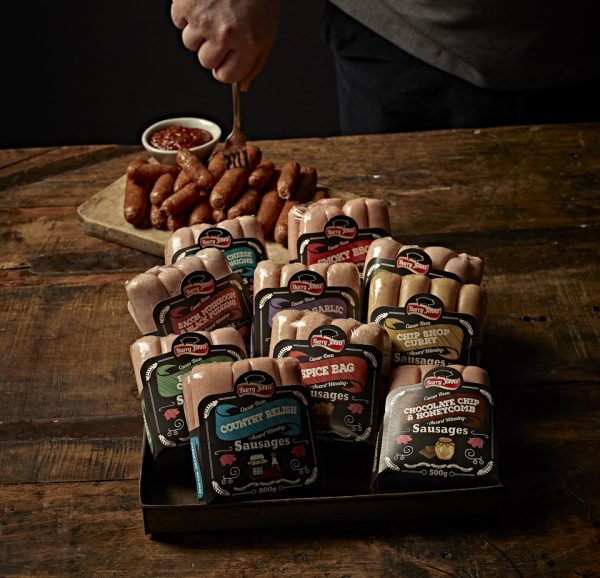 Barry first started making sausages in his father’s butcher shop but as demand grew he knew he needed a bigger premises to produce his tasty sausages. He opened his own purpose-built factory in 2013 and he hasn’t looked back since. Barry produces over 35 different flavour’s including chocolate chip, chip shop curry, caramelised red onion and bacon and cheddar cheese. Find all of his flavour’s here.

In 2017, after already picking up several awards on the Irish food scene, Barry took home the prize of Guinness World Record for the most hand hand linked sausages in 60 seconds. He produced 78 sausages and still holds the title!

Where can you find these amazing sausages?

Barry John’s sausages is the stand that you will always find the big queue around at the National Ploughing Championship, Bloom in the park, Taste of Cavan and other big national events.

The sausages are also stocked in his family butchers in Cavan Town- Crowes Butchers. You will also find them in Supervalu’s, Daybreaks and Centra’s in the Cavan region.

Barry John’s also provides online ordering and delivery. As well as providing great value packs they also offer a 6-month subscription box for only €140.  You get 6 Deliveries of Barry John Award Winning Sausages. In each delivery there are 5 packets of their top selling award winning flavours. Delivered through DPD in a polystyrene cool box with ice packs so you can be reassured your subscription box gets there in perfect condition. This could be the perfect gift too!

Created in Cavan are delighted to have Barry Johns Sausage as part of the network of food producers, hospitality, and food retail members. If you are interested in joining our growing network and becoming part of our collaborative food, drink and hospitality community just contact us here today.